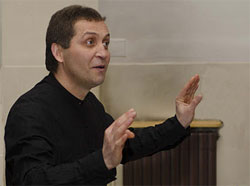 Murat Khupov was born in 1963 in Adygea, a small republic of the Russian Federation. He studied music and obtained the titles of Orchestra and Choir conductor in the Conservatory of Rostov-na Donu and Choral Singing in the Special Conservatory of Maykop. He was director of the National Choir of his country, Adygea, and co-author of its National Anthem. He was also director of the National Orchestra in the Republic, with which he offered several concerts, and conducted other orchestras in his country, as well as the chamber choir of Rostov-na Donu. He was awarded the prize of the Russian Alliance of the Five (the Mighty Handful) and performed the premiere of two cantatas that he himself composed.

He came to Catalonia some years ago and collaborated with the former choir of the Orthodox Church of Barcelona. Nowadays, he lives in Barcelona and he is the conductor of several choirs, the Impromptu choir of Sant Tomàs and the two Canta Conservatori choirs (Barcelona’s Conservatory of music), among others, in which he is doing an excellent job. He has been director of the choirs of Catholic Center of Sants and Center Riojano of Barcelona. He has collaborated with the choir of Friends of UNESCO and with Magister Arte Choir. Teacher of music theory and piano in the Institució Montserrat and organist in the parishes of Sant Josep Oriol and Sant Agustí. He was vocal director and member of the ensemble La Plèiade, specialized in music of the Renaissance, and also assistant director of Orfeó Atlàntida. He worked as a composer, arranger and vocalist at the Estudio Musical Internacional.

He took the responsability as the conductor of the Cor Bach on September 1st, 2008.

Here you can read the interview published in the Spanish newspaper “El Periódico” on January 14, 2017: 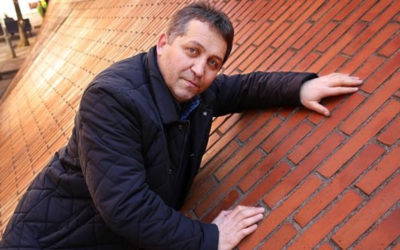